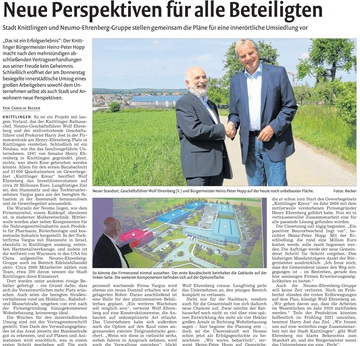 Translation to English (by NEUMO):

New perspectives for all involved

"This is a sense of achievement": The Knittlinger Mayor Heinz-Peter Hopp makes after the several hours of final contract negotiations from his joy no secret. After all, the transfer of a major employer on Thursday sealed the inner city, opening up new perspectives for both the company itself and the city and its residents.
By Carolin Becker:
KNITTLINGEN. It is a project with a long lead, which is presented by the Knittlingen Town Hall Chief, Neumo Managing Director Wolf Ehrenberg and Deputy Managing Director and authorized representative Harry Jost in the company headquarters at Henry Ehrenberg Square in Knittlingen. After all, a new building such as the family-run company, founded in 1947 by Senator Henry Ehrenberg in Knittlingen, is planning nothing that could be rushed. For the first phase of construction on 31.000 square meters in the "Knittlinger Kreuz" industrial estate, Wolf Ehrenberg estimates the investment volume at around 20 million Euros. The long-term goal is to remove the headquarters and the subsidiary Vargus completely from the crowded situation in the city center and settle in the business park.
The roots of Neumo are, as the company symbol, a cow's head, can be read in modern dairy technology. In the meantime, besides components for the food industry, products are also being produced for the pharmaceutical, biotechnology and cosmetic industries. The subsidiary Vargus, headquartered in Israel, also based in Knittlingen, produces carbide tools, and the Neumo Ehrenberg Group, which is located worldwide from Wisconsin in the USA to China, is also active in the stainless steel trade. About 2.000 employees are part of the team, about 200 of which call the city Knittlingen their place of work. Among other things, huge vessels are manufactured there - one reason why
those responsible want more space. Also, the cramped road conditions around Hölderlin Street, Bahnhof Street and Mozart Street, surrounded by only after the company was added residential development, by no means ideal. The course for the inner-city removal is provided with the contract signature. From the roof of the administration building, the area beyond the main road is clearly visible, and plans and animations show what should be done in a first step: the growing company Vargus will also receive a new domicile as well as the stored tubes. Subsequently, a hall for the space-intensive vessel construction is planned. "Further growth should be possible", Wolf Ehrenberg points to a construction method that allows extensions in an uncomplicated way. The company has also secured the option of purchasing an adjacent second plot. "If we take them in perhaps six or seven years, the administration will move," Wolf Ehrenberg predicts. In the long term, the company is aiming to completely leave the current area. This opens up new opportunities not only for the neighbors, but also for the city as a whole. Although the city hall boss does not want to say too much about a later development of the more than four hectare area in the direction of residential development - here the planning begins -, but the agreement with Neumo is already a success story. "We were persistent," Heinz-Peter Hopp points to discussions that he had already led to the start of the commercial area "Knittlinger Kreuz" in 2006 with the now deceased company founder Henry Ehrenberg. Now in trusting cooperation one for all suitable solution has been found. The implementation should begin quickly. "A positive preliminary construction notice is available," reports Heinz-Peter Hopp. With the development, which would cost around one million Euros, should be started quickly. The orders will be awarded step by step to the new municipal council. The Mayor expressly thanks the previous elected representatives: "I am pleased that the local council has always followed the path - in an effort to offer expansion opportunities to the companies located here." The Neumo Ehrenberg Group does not want to lose any time either. Even in early autumn, the first earth movements were on the plan, announces Wolf Ehrenberg. "We expect the work to be essentially in 2020." Parts of the production could hopefully move in the spring of 2021, naming Harry Jost the target. "We look forward to continuing close cooperation with the city of Knittlingen," Wolf Ehrenberg makes a clear commitment to the location, and the mayor calls the company even a "pearl".