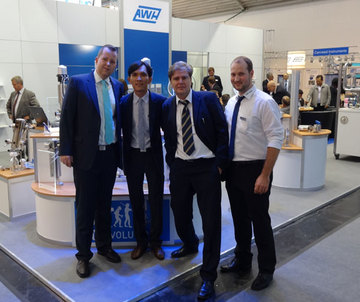 The NEUMO-Ehrenberg-Group with its headquarter NEUMO in Knittlingen, with the AWH in Hötensleben and with its valve specialist RIEGER in Aalen supports a high technology aid project at the University in Ho Chi Minh City, Vietnam.
The „German Mittelstand“, also called engine of the German economy is well known for acting globally, making new contacts and pushing the export of high technology equipment forward. According to studies of Oxford Economics Institute, every third medium-sized company in Germany generates more than 20% of its turnover abroad. Emergent countries like Vietnam, which promise a prosperous environment, have become more interesting over the last few years.
A great example of how growing markets can be cultivated with long-term engagement shows the Neumo-Ehrenberg-Group, that is participating on the project German Vietnamese Technology Academy (GVTA) since March 2013. The raising of a 200 m² big laboratory at the University of Ho Chi Minh City, the former Saigon, is meant to be finished these days. At the University of Food Industries a training center will be installed to educate and train 2.000 to 4.000 Bachelor and Master graduates each year. NEUMO, AWH and RIEGER deliver a special designed training module with different kinds of valve and fitting types to Vietnam.
Enrico Köninger, responsible for International Marketing and Technical Sales has substantially managed the project and has been in Vietnam personally in March 2013 to introduce the NEUMO-Ehrenberg-Group to the university in Ho Chi Minh City. "Because in Vietnam a dual education system doesn’t exist, theoretical trained experts have to get familiar with equipment of food industries in practice.", says Köninger. Therefore the Federal Ministry for Economics and Technology supports this project. "The food industry in Vietnam is one of the most important industries and scheduled high growing rates“, explains Jenny Schaffrath of Projektmanagement gpdm International e.V.
Industrial Engineer Markus Langsch: The potential of the Vietnamese market offers many chances and opportunities especially for medium-sized companies. As a Business Development Manager of the NEUMO-Ehrenberg-Group I care for the South-Asian market directly from our office in Vietnam. Of course such a project shows its importance also to other neighbor countries in South-East Asia.
Eleven Technology partners including Danfoss, Siemens, KHS and Endress+Hauser work together to set up the demonstration laboratory in Ho Chi Minh City. The complete module with which the NEUMO-Ehrenberg-Group takes part is calculated of more than 30.000 €. It includes various different components, that are in use in breweries, dairies, food productions and also in pharmaceutical industries and bio technologies. The module will show the complete range of armatures and fittings, starting from a switching panel, over leakage proof butterfly valves and hygienic mix proof valves up to RIEGER’s full aseptic mix proof process valve. Armatures for all hygienic demands are assembled together in this unit. The patented NEUMO-Fitting Technologies ConnectS®, BioConnect® and BioControl® complete this concept and shall sharpen the minds of the students regarding the high quality standards of these products.
„Meanwhile NEUMO is active in Vietnam for about 10 years with an own office and has completed successfully several projects in breweries and food industries. With further activities in the fields of cosmetics and pharmaceutical industries we are continuing our success in this region. Since March 2013 Markus Langsch as a Business Development Manager is directly in place for us in Ho Chi Minh City and in the NEUMO representative office in Hanoi. There he’ll work together with our 4 Vietnamese sales employees to focus on the market penetration and the growth for the complete NEUMO-Ehrenberg Group", tells Matthias Dörr, Deputy Sales Manager at NEUMO.
Dipl.-Ing. Markus Langsch has a long experience in this branch and in international sales. He became a member of the NEUMO-Team in the beginning of 2013 to develop the activities of NEUMO in Vietnam and the countries around. „NEUMO has seen the potential of the Vietnamese Market a long time ago and we will continue our story of success with both, competences and ambition and also with respect to the accomplishments of the people in Vietnam.“, explains Markus Langsch and adds: „Vietnam is getting more and more attractive for the German Mittelstand. Also because of its geographic location it offers great opportunities for working on the complete South-East Asian market.“
In Vietnam there is a strongly growing demand on industrial produced food and drinks, because the industrialization is moving forward and the traditional self-supply of the population is decreasing.
"Many plants are obsolete and have to be modernized, new plants have to be built. We as the NEUMO-Ehrenberg Group want to be part of this process and we want to continue increasing our popularity among the stakeholders of food industries.”, describes Köninger. And: Skilled workers, that can operate modern production systems are, missing. This is why the German-Vietnamese training center for food industries at the university of Ho Chi Minh City is an important step for the industry in Vietnam and therefore also for the penetration of this market.
In this project the gpdm connects big German Companies in the beverage sector. “The companies offer their equipment for the project for free. We develop a curriculum, which is related to the sponsored technology and which is close to German education standards.”, says Jenny Schaffrath. Since April those responsible of the NEUMO-Ehrenberg-Group planned their unit, in the mid of June the production has been released by the executive board and these days the module will be delivered by seafreight to Vietnam. „In the same time training materials for the different valves and a documentation have been written.", explains Köninger.
In the following weeks the components of the different manufacturers will be installed in the university in Vietnam. For the grand opening, which is planned latest in March 2014, Markus Langsch and Enrico Köninger will be in place personally to make further contacts to the university, its graduates and to representatives of food industries.
„During this event the students have the opportunity to discuss with German experts. As a direct contact I am in close distance and I will keep this contact between studies and industry.”, tells Markus Langsch.

For the involvement in this project the NEUMO-Ehrenberg-Group and its 1800 employees worldwide are not only focused on increasing the popularity in the region and generating future orders. The family guided company group is interested in contributing an important share to the development of the country and its economy for the benefit of the Vietnamese population.

Update Construction of the NEUMO-Ehrenberg-Campus